RNLI, HM Coastguard and the City of Edinburgh Council worked together to improve water safety signage at Cramond Island. 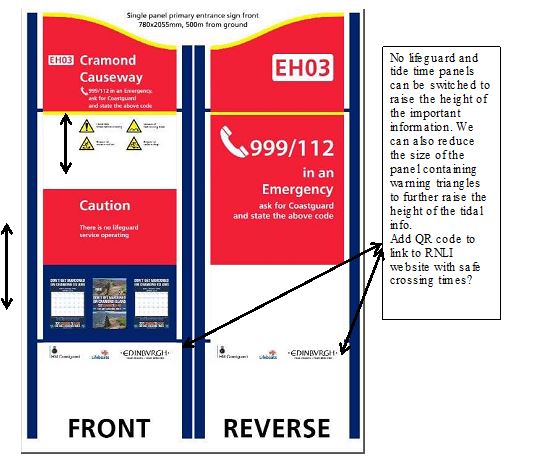 A few years ago it was recognised that there were problems with people being trapped by the tide in Cramond Island.  This meant that the Queensferry lifeboat was not available for any other incidents that occurred at the same time.
They quickly realised that although there was signage at Cramond it wasn’t the right type of signage as it did not comply with any British Standards.  The RNLI wanted to put into place signage that was easily identifiable as a warning that the tides at Cramond can change quicker than you may think. Some of the old signs were removed that were not doing the right job.
The lead organisation was the RNLI Partners were HM Coastguard, the City of Edinburgh Council, especially the local councillors for Cramond. The theme was water safety and the locality of the initiative was Cramond village and access to Cramond Island. Intended audience is any visitor to the area, whether they are local, day trippers or international visitors.

There were both financial costs and resources costs to be considered when rescuing stranded visitors from Cramond Island, but perhaps the most important need for the initiative was to reduce the risk to life of both those who were in trouble and any bystanders who may feel the need to assist, putting their own lives at risk.

The main aim was to reduce the number if incidences of people being cutting off by the tide and then being stranded on Cramond Island. There was another objective in that the RNLI wished to ensure that people visiting Cramond were able to stay safe by giving them the correct information in an instantly recognisable format no matter their native language – pictographs.

A lot of work done by RNLI, the local authority and the Coastguard, which included a risk assessment of the area to ensure that the correct risks were understood. There was a public rescue equipment audit of the equipment available to see what was there and available if need be. Most important was to look at the existing signage to see what was there, was it useful and could it be replaced.
From the information gained from these audits a draft signage review was prepared. Following this different signs were drawn up for evaluation for the local authority so that they could understand what costs would be for each of the different options that they were presented with as they were funding the new signage at Cramond.
The RNLI and the Coastguard provided the expertise that was required for the initiative and the local councillors ensured that the new signage was in keeping with the local area.  The RNLI did not want to put in signage that was unsuitable and unrequired.
Meetings were held so that the councillors could be outline the problem and the RNLI give what they thought was the answer and what the proposals were for the future.  It was a nice interaction and consultation where all participants were able to feed into the process and get to a set of signage that was acceptable to all.

There were challenges around whether new signage was needed and the success was that due to the consultation people felt much happier about the signage being put into place.

Fit for purpose signage was erected where it was needed at Cramond, along with an increase in the numbers of signs meeting British Standards.  It has been impossible to tell if the new signage has helped to reduce the number of instances where people are stranded on Cramond Island as some may never call for help.
Interactions with the general public has shown that they now realise that the tides are the main danger to consider when visiting Cramond Island.

There always needs to be consultations with any initiatives such as this to ensure that all interested parties are included and can have their say.
The process has been used successfully in Aberdeen, where new signage was required following the lessons learned from the Cramond signage initiative.