Street Feet is a road safety initiative which uses a bespoke training kit designed to educate children on a range of road safety subjects. It is a modern approach to learning the Green Cross Code and is directed at children of nursery age and children within primaries one and two at school.

The kit represents roads, crossings, and pavements and also contains role playing tabards, signs, and traffic lights (see image). The training resource can be used wherever there is suitable floor space including, for example, school playgrounds and other recreational areas, depending on the weather. The kit is valued at approximately £400 and was sponsored by a local businessman. It can be purchased from Keltic Clothing

Street Feet can be delivered using the attached guidance notes without any prior training. However, it is very beneficial if you can observe a few sessions before delivering it.

The Scottish Government initiated the Road Safety Framework for Scotland to 2020. Scotland’s road safety vision is that there will be: “A steady reduction in the numbers of those killed and those seriously injured, with the ultimate vision of a future where no-one is killed on Scotland’s roads, and the injury rate is much reduced.”

As part of the Dumfries and Galloway Road Safety Partnership [www.dgrsp.co.uk] we support ‘Vision Zero’ – working towards zero road death and much seriously reduced injury rates’ and recognised that we were lacking a resource to educate pre-school road users.

As one of the target vulnerable road user groups, a reduction of 50% of the number of children killed or seriously injured by 2020 is challenging. The Scottish Government’s policy on early intervention and Curriculum for Excellence framework encourages hands-on, multimedia experiences as well as tasks at home, nursery and school and, after doing research into Road Safety education kits for children, we found ‘Street Feet’ to be the best option available, within the budget that we had been given by our sponsor (a local businessman). We were seeking an interactive kit which enabled us to teach young children both the dangers associated with crossing roads and safe ways to do so. This training resource is a modern method of teaching young children vital road safety information.

According to Transport Scotland, there were a total of 9,391 road casualties reported in 2017 of which 146 were fatalities, 1,580 seriously injured and 7,665 slightly injured. SFRS personnel in Dumfries and Galloway realised the importance of developing road safety awareness and knowledge towards preventing future casualties, particularly in young children, as the number of vehicles on Scottish roads continues to increase.

The principal aim of the initiative is to reduce the potential for injuries to nursery and early primary school children on or near roads.

The objectives of the initiative are to:

There are a number of anticipated outcomes for young children who take part in the initiative. These include short term: Children will be more aware of road safety, understand the dangers posed by traffic and roads, have increased knowledge about road signals and crossings and will be able to be more confident and independent in identifying hazards, improved observation and listening skills in road traffic environments. The long term anticipated outcome is that the initiative will contribute towards a reduction in the number of children involved in road traffic incidents within the Dumfries and Galloway SFRS Local Service Delivery Area. 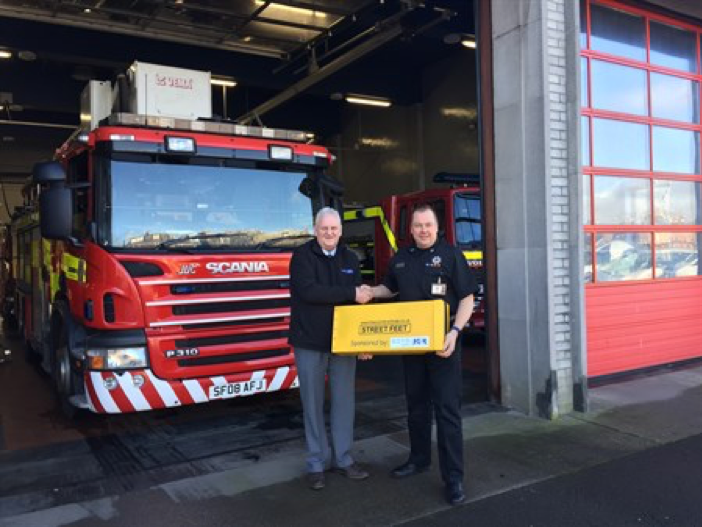 The kit models real life environments such as crossings, signs and “the green man”. Through role- play participants learn that it is their responsibility to check before crossing the road. Each session lasts for around half an hour.

The kit is laid out on the floor representing a road with a pavement either side as well as a crossing. Stop, Look, Listen and Think is the theme throughout the session. Key messages are covered including:

Conversation is initiated including discussion about what types of vehicles can be found on the road outside their school, can all traffic be heard approaching etc. Participants are invited to wear tabards to represent the types of vehicles with other participants being pedestrians. The importance of using a crossing attendant, where there is one, and the meaning of the colours of the lights for both vehicles and pedestrians is also covered.

To date, Street Feet sessions have been delivered to over 750 children across Dumfries and Galloway. During the session the children’s awareness, understanding and interpretation is monitored by SFRS personnel. This is done through the children’s participation in the various exercise and by open-ended questions throughout, as well as observing how the children interact with each other and perform the activities.

Follow up sessions can be arranged, if requested, a year later for evaluation purposes and to understand how the learning and awareness of road safety has resonated.

“Street Feet has been an excellent opportunity.. to work with the junior section of the school...”

The main points that we have learned through the development and delivery of this initiative are: