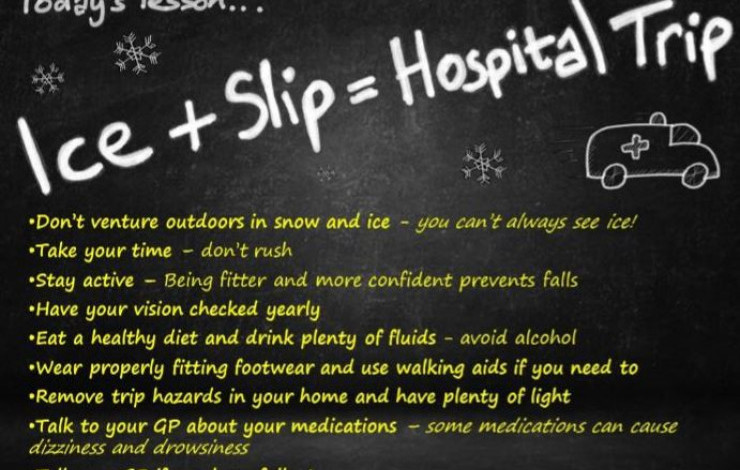 Following a sharp rise in older people being admitted to hospital due to a fall, colleagues in in Perth and Kinross Health and Social Care Partnership decided to look into the issue in more detail, to help understand any factors which might help to prevent future incidents.

The unusually high number of unscheduled hospital admissions occurred in the winter of 2017, prompting a deep dive. David McLaren (Researcher/Project Manager) explains: “Looking at the figures more closely, we saw that these were mainly due to falls and they occurred between the 13th and 15th December. Working with my colleague Carolyn Wilson (Falls Manager), we looked into the specific circumstances of these falls in terms of how we might put in place prevention measures”.

Drawing from hospital admissions and hourly weather station data, David and Carolyn noted that the spike in falls happened during an unexpected cold snap. After a brief thaw, temperatures dropped rapidly overnight to almost -10°C - conditions that typically lead to black ice. It is possible that rural residents may have perceived that the cold snap had eased off, and ventured out prematurely or failed to take necessary precautions.

With hospitals already very busy at that time of year, the increase in admissions due to preventable injuries has implications in both human and financial costs.

David continues: “We also know that if a person suffers a fall, they are more likely to fall again in future and they may lose their confidence and become less active, which has further negative implications for their health and wellbeing in general”. “It’s a double edged sword as we want people to stay safe in severe weather, but also for them to remain active.”

David and Carolyn are looking at ways to promote safety and awareness to individuals and communities during cold snaps. “We know from the evidence that most of the falls occurred outside. This year, we introduced a publicity campaign ‘Ice + Slip = Hospital Trip” with advice about staying safe in cold weather and if they do have a fall, to tell their GP.

“We are also looking at things like the management of gritting practice in rural areas and whether a community campaign would help to remind people to look out for each other. For example, helping older people put their bins out on cold mornings, when they may be more vulnerable to falling, or providing food during sustained cold snaps.”